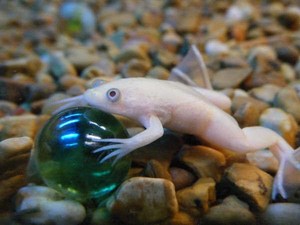 The African Clawed Frog is an interesting species. There are many different characteristics that help make this species unique. Some characteristics are that it is tongueless, toothless, has claws on its hind feet, uses hands to get food in its mouth, and is completely aquatic.

The common name is the African Clawed Frog while the scientific name is Xenopus laevis. The classification for this species is that it belongs to Kingdom Animalia, Phylum Chordata, Class Amphibia, Order Anura, Family Pipidae, and Genus Xenopus. The average adult African Clawed Frog grows to about 12 centimeters in length and weighs around 200 grams. They’re often a greenish, grey color, although there are other colors of these frogs such as the albino. Their eyes and nose are on top of their head which enables them to see and breathe without being too visible. Their habitats are found in eastern and southern Africa, along the African Rift Valley, where they prefer stagnant waters than fast flowing streams. They can also inhabit warm shallow waters creeks and rivers during the summer and move into the flooded forests during the rainy season. African Clawed Frogs now can be found in numerous freshwater habitats outside of Africa.

The African Clawed Frog is a carnivorous animal. Their main prey is water bugs and small fish but it is also known to eat its own skin when it is shed. They also hunt small invertebrates such as insects, spiders and worms. African Clawed Frogs in captivity have a diet that mostly consists of worms. Small mammals including rodents, cats, dogs, and birds and reptiles prey on African Clawed Frogs but Herons are their most common predator.

They can survive in water with high salinity and also have a high tolerance to the changes in the environment. African Clawed Frogs can survive in nearly any body of water, ranging from the desert oases to ice covered lakes. They also have a line of stitch marks, called a lateral line, along the sides of their bodies that act as sense organs that can detect vibrations and movement to help find prey. The African Clawed Frog is known to have a long lifespan for small aquatic animals. They can live to around 5 to 15 years in the wild. Some adult African Clawed Frogs have been recorded to even live up to 30 years old in captivity.

Even though African Clawed Frogs has been labeled Least Concern (LC) from extinction, the population numbers have fallen in certain areas due to bad water quality. Taking extra steps like no dumping trash and chemicals or littering in the water can help the water quality stay clean and help this species live a healthy life.

Our class African Clawed Frog from what I have observed is more on the timid side. He was not used to humans at first, so he was scared to eat food which resulted in him swimming away most of the time. He is now more outgoing and even makes me laugh. There are also times I just find myself watching him because of his cuteness and the way he swims.