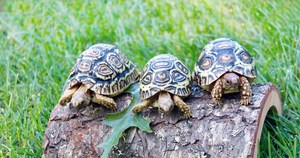 The African Leopard Tortoise- Stigmochelys pardalis- is a large tortoise found in Sub-Saharan Africa. They make awesome pets that can live up to 50 years!

The African Leopard Tortoise can grow up to 70 centimeters in length and can weigh as much as 29 lbs. Their large, leopard fur patterned shell is there to protect their softer bodies from any danger. Their limbs and head are totally retractable, leaving nothing but their shell in reach or predators. They have sharp, beak-like mouths to graze on plants more effectively. Generally, the females will be larger than the males.

These tortoises are widely distributed across Africa from Sudan to the Cape. Leopard Tortoises are most commonly found in shady, semi-arid areas with shrublands and grasslands for grazing. They are herbivores grazing on grasses, leaves, berries and flowers. Occasionally they can be hunted by a wild cat or dog, but humans are their main predators because humans believe these tortoises to be an agricultural pest. However, the threat is minimal since not many predators try to face off with the tortoise’s shell. To protect this amazing species, humans can stop hunting them because they are not pests and are doing no harm especially when they are remaining in remote areas to protect themselves.

I have gotten the chance to observe 2 African Leopard Tortoises in class and have a few of my own observations. Neither one is too timid around students (and there’s a lot) and will even let us pick them up for a little bit. They will totally retract if it gets pretty noisy when we’re standing around them but then they come back out fairly quickly. Comparing my research and own observations, they line up in most aspects.